Distributed internet scale hash table is a CAN and the concepts detailed in this paper can help in building a completely decentralized distributed system like a distributed datastore. The CAN described consists of multiple nodes and each node stores a chunk called the Zone of the entire hash table. In addition each node holds information about a small number of adjacent zones in the table. Requests for a particular key are routed by intermediate CAN nodes to the node which contains the key. The CAN described is completely scalable, fault tolerant, scalable and is implemented at the application level 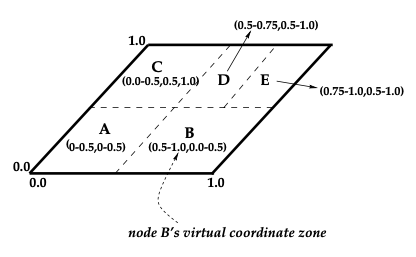 To retrieve data any node can use the deterministic hash function can find the point in the coordinate space. If the point is not in the zone owned by the node or its neighbors, the request will be routed to the target node through the CAN infrastructure. Nodes in the CAN self organize into an overlay network that represents the virtual coordinate space. Each node learns about the nodes which owns neighboring zones and stores them. This set of immediate neighbors serves as coordinate routing table that enables routing between arbitrary points in the coordinate points. 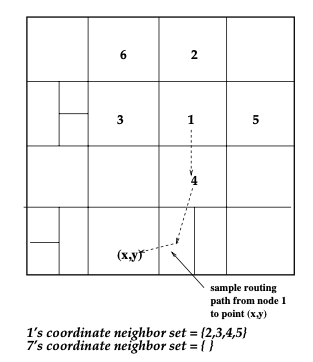 CAN organically grows with addition of new nodes and when a node addition happens a portion of the coordinate space gets allocated to it. This Is done by splitting the zone in half from one of the existing nodes. When a node is added 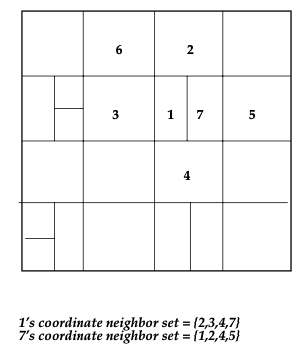 When a node need to depart gracefully, the zone of the departing node will be merged to a neighboring node and merging is not possible a neighboring node with smallest zone will handle to zone from the departing node temporarily. In the event of a node failure which is identified by neighbors by prolonged absence of message from a node, a takeover process id followed. Each neighboring node when it identifies a failed neighbor, a timer is initiated in them in proportion to the volume the zone in each node. When the timer expires, the nodes will send out a TAKEOVER message to all the neighbors of the filed node and all the neighbors receiving the message will cancel its own timer. This will make sure that the neighbor with the smallest volume will take over the zone from the failed node. In situations where only a half of the neighboring nodes are reachable, the node performs a wider ring search for nodes residing beyond the failure region to identify neighbor state to initiate the takeover process. Since the take over can result in nodes handling sub optimal number of zones, a background process will reassign zones so that CAN operates efficiently.